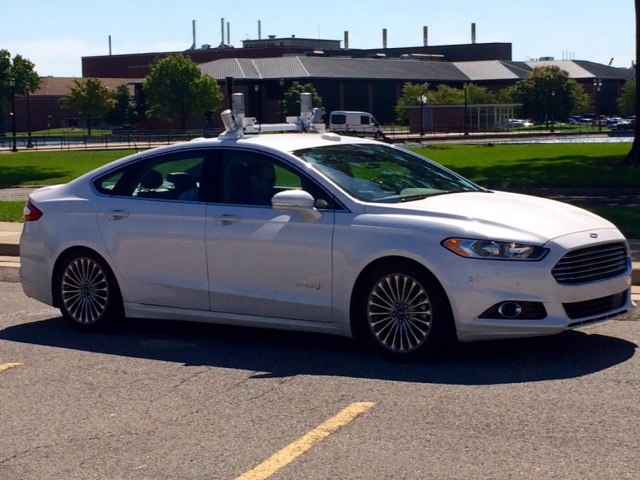 The driverless car began to turn left at an intersection just as two pedestrians stepped off the curb, ignoring the ‘don’t walk’ sign. A warning chirp sounded inside the car and it began to slow, mid-way through its turn.

The two engineers were part of a Ford Motor Company autonomous vehicle team and the car was a modified Ford Fusion. Taking the wheel immediately brought the car under a driver’s control (although it was never out of control, just creeping through the intersection). I was along for the ride in the back seat with another journalist, getting a sense of how an autonomous car works.

This was a demonstration drive, so jaywalkers and other random acts of traffic spontaneity were not part of the demo. The Fusion was moving on its own, but was not left to drive at random. The maps that live at the heart of its complex software and algorithms and its array of sensors would see to that. As would the two engineers in the front seats.

During a short drive near Ford’s sprawling headquarters in Dearborn, Mich. the car often drove better than a human does. It accelerated smoothly, maintained the speed limit, and stopped at stop signs and red lights. It lingered longer at a crosswalk than an impatient urban driver typically would after a pedestrian (a Ford employee who staged his crossing to show how the car would respond) had crossed the street. But, as one of the engineers told me after our ride, the car will always err on the side of safety, during its development and after. I pressed them on the dilemma of what could happen when the car needs to make a seemingly ethical choice. When it needs to, for example, decide how to best avoid a child who has just darted out – should it save the lives of the car’s occupants or of the child?  They, being true blue Ford employees, dodged the question, saying only that the car would do what was safest.

And to be fair, they, and no one else, really knows the answer to that question or the myriad other questions that surround autonomous cars. Ford sees a future where cars navigate the streets according to downloaded maps and where we might own an autonomous car and a car that we actually drive. Other automakers have different perspectives.

From my driver’s perspective, it’s a strange experience to watch a steering wheel turn without a human’s input, to feel a car move without a human doing anything. But it might be an experience we all will have to get used to.

« Shooting Cars: How to Capture that Perfect Auto Image
Driving like a racer (or at least trying to) »

2 thoughts on “Driving without drivers”

This site uses Akismet to reduce spam. Learn how your comment data is processed.

More places to find me